Support for the Reconstruction of Aleppo

The Novae Terrae Foundation started last November 2017 a project to support the reconstruction of the Cathedral of the Holy Virgin of Aleppo in devastated Syria, and supporting the Christian minority there. Over the last months we have been in close contact with the Archbishop of the Melkite Greek Catholic Archeparchy of Aleppo, Archeparch Jean-Clément JEANBART.

Between 19 July 2012 and 15 December 2016 there were 31,000 people killed in Aleppo, 76% of all fatalities were civilians
The conflict in Syria began on 15th March 2011, and has since taken the conflict has taken the lives of almost 250,000 people, with almost 3 million Syrian refugees fleeing to neighboring countries to escape the violence. Before the conflict started in 2011 the total number of Syrian Christians numbered about 2.4 million or 11-12% of the population: 1.1 million Greek Orthodox, 700,000 Syrian Orthodox, 70-100,000 Armenian Christians (Apostolics and Catholics), and 400,000 Catholics of various rites. It is not clear how many Christians fled and are refuges in countries around Syria. But we know that the majority of Christians were not able to flee the conflict and are living in the devastated cities. Aleppo had once one of the largest Christian population, and we all know how much suffering the citizens of that city have experience on almost 7 years of conflict.

The Archeparchy of Aleppo is one of the oldest ones of the Melkite Patriarchate of Antioch.
The eparchy of Berea (ancient name of Aleppo) had its origin goes back to the First Council of Nicaea (325). The eparchy of Aleppo was elevated to the rank of archeparchy in the sixth century
There are many needs in Syria, and particularly in Aleppo, we cannot try to fix them all, but what we will try to do is help the reconstruction of one of the main Christian symbols in the Middle East, the Cathedral of the Holy Virgin of Aleppo. In response to this crisis growing humanitarian crisis, Novae Terrae Foundation will do a fundraising appeal to all our friends around the world for the reconstruction of the Cathedral.

This Cathedral built around 1830 unexpectedly during the Ottoman empire that prohibited all constructions of churches,
it has been a place where many Christians have received multitude of blessings reason
why for centuries thousands of pilgrims go to venerate our Lady to Whom this Cathedral is dedicated 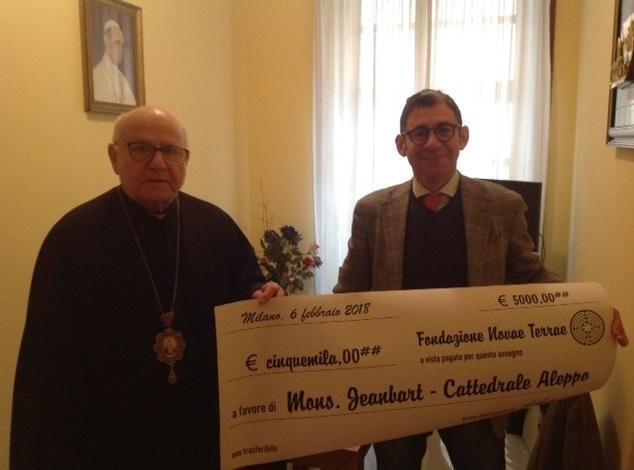 Our first appeal generated €5,000 from around the World, we sent it to them January. Archeparch Jean-Clément JEANBART came to Rome in February and we were able to be updated in person about their needs and also to give them a symbolic check of the funds that we had sent them in January.
Desktop Version