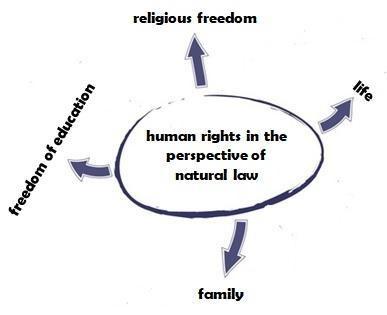 LIFE
Right to life is the first human right, without which any other right cannot be defended or even conceived. We want to defend everyone’s right to life, from conception to natural death. The dominant thought often exploits dramatic existential conditions (for example, on the subject of abortion and euthanasia) to propose an ephemeral right to auto determination (of the woman, of the terminally ill). However, there isn’t an international law which justifies abortion, euthanasia, modern forms of subjection of children and women for sexual reasons or the commerce of people or human organs. All this risks to classify several lives as “lives that are not worth being lived” and so as unnecessary lives; furthermore it often represents the most simplistic way out for a State which can’t carry out its functions, which can’t even take care of the most weak people (ill people or mothers in difficulty). Our defence of life entails the defence of the rights of the most weak people, in the firm belief that unworthy lives don’t exist. In full compliance with child’s rights, we promote the right to paternity and maternity for children.


FAMILY
We consider family as the fundamental cell of the society, a fundamental place for the cultural, educational and intellectual development of the person and a priceless resource for the community because of its role of material and moral assistance towards the single person. Family is also a powerful factor of social development and community cohesion for the democracy: the stability of the marriage is a necessary element for the creation of positive and virtuous attitudes on a community level. Family consists in the union of a man and a woman because, to fulfil its social role, has to represent a stable, exclusive and open to life bond. The insane comparison between forms of homosexual private affectivity and the familiar institute indicates an unacceptable regression as for civil and social development of the nations.


RELIGIOUS FREEDOM
Religious freedom is often thought as a simple “negative” possibility to exercise your own cult in private. According to us (and according to international right and human rights) it has to guarantee to each religious belief the possibility to contribute to democratic pluralism with its proposals inside the public speech. Democracy has to be lay, in the sense that it has to guarantee neutral political mechanisms in respect to religious confessions, but not secularist, that is it can’t and it mustn’t push believers and their beliefs out the political debate. Opinion and expression freedom have to express themselves also in concrete defences of everyone’s ethical and religious sensibility, as for the case of consciousness objection. Today many worries deal with the “reduction” of human right to religious freedom in several forms, more or less violent, in all the Countries of the world.


FREEDOM OF EDUCATION
Not public bodies which supply a service of formation and education have to be considered an added value for the society, as they contribute to a plural vision of the society and they allow parents to choose the best educational orientation for their children. Parents and families are the first ones who have the right and the duty to educate, as it’s written in the range of the human rights which are recognized on an international level. Parents have the possibility to exercise these rights directly or by availing themselves of public educational institutions which can be public or not public, included the “home schooling”. A full respect of the educational freedom and of parents’ right-duty has to envisage also new forms of consciousness objection (as in the case of thoughts relative to Gender ideology) and the eventual full respect of this consciousness freedom.
Desktop Version